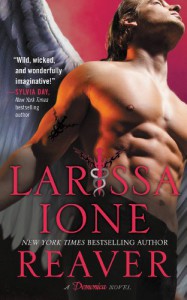 This book may be unsuitable for people under 17 years of age due to its use of sexual content, drug and alcohol use, and/or violence.

Reaver is an angel with a past, a record, and a less-than-heavenly attitude. Powerful enough to fight alongside the fiercest battle angels-and crazy enough to risk his wings on a one-way mission to hell-he's agreed to go where no angel has ever gone before...to steal the most seductive and dangerous prize of Satan himself.

Harvester is one of the Fallen, a once-heroic angel who sacrificed her wings to work as an undercover agent in hell. But now her cover has been blown, and she's been doomed to an eternity of agonizing torture. Even if Reaver can snatch her away from Satan's lair, even if they can fight their way out of the underworld's darkest depths, there is one thing Harvester can never escape-her newfound thirst for an angel's blood...

What can I say? Reaver was an amazing story, with a long trek through Sheoul, lots of innuendos, some nasty angels, good demons and so much intrigue my head was spinning.

I have started reading this series completely out of order, so I may have missed a thing or two – however, as you can see, I still loved Reaver! The writing is so good, and the characters grab your heartstrings from the beginning without ever letting go. There are incredible fights, both verbal and physical, romance, and of course a level of intrigue that is very hard to find. Reaver definitely showed a new side of himself here, especially because he managed to stay calm and actually do something constructive by trying to save Harvester. And for once, possible because she’d just endured months of torture, she didn’t have all her shields up, so she was much less prickly than usual.

The contradictions of this story don’t only inhabit Harvester, Reaver has his own, but also, the whole universe where there are angels and demons, and the angels are really supposed to be on the side of ‘good’, there are exceptions to every rule. Fast paced, the story took me first on a long, and quite scary trip to Sheoul, then there were so many other things happening it was hard to remember where, exactly, I was.

Written in third person past tense, mostly from Reaver’s point of view, but also showing the reader quite a bit of what happens inside of Harvester’s head, Reaver is a very solid installment in the Lords of the Underworld / Demonica series. These demons are truly one of a kind, and I had almost forgotten how much I love them!

Some of my favorite Reaver quotes:

Enjoy. She was going to enjoy something while enduring and eternity of torture. The very fact that the word enjoy had broken through the gray matter of her brain at all was a measure of how high a threshold for pain and how low a threshold for pleasure she now had.

Reaver held Harvester’s frail body tight against his as he navigated the final steps of a winding ledge that dropped them into a world of weird.

Only Harvester could push someone away while simultaneously keeping them close. She was the most contradictory person he’d ever met.