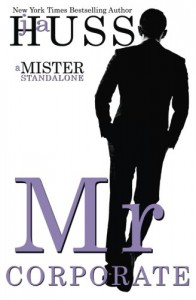 Weston Conrad is the best headhunter in the business. That handsome smile goes a long way towards convincing most people to trust him with their future.
I’m not most people. I’m his direct competition. And it doesn’t hurt to be just the kind of woman he’s been looking for.
I’m gonna flash you these legs, Weston Conrad.
I’m gonna wear low-cut shirts and micro-mini skirts.
I’m gonna dazzle you with wit and conversation and kiss those lips like they’re exactly what I’ve been waiting for.
So don’t hate me when you figure out my secret.
You understand, right? You’re Mr. Corporate and this is just business.

Mr. Corporate made me doubt what I thought I knew about the Misters, and I enjoyed that he was keeping his card so close to the chest he wasn’t even thinking about what they were.

I really enjoyed Weston and what he brought to the story in Mr. Corporate, but Tori truly grated on my nerves. For almost the whole story, she went from hot to cold to scalding, and her reactions didn’t really make much sense to me. Even when I got to know her back story, I didn’t fully understand her or think she was justified in the way she treated Weston. The overall story and plot was awesome, though, and I found Weston to be great – especially because even at the end of the story, he was still keeping secrets about his own past. Just because he thought he could.

There is still someone in the background pulling all the Misters’ strings to get them into situations that are really potentially deadly. Mr. Corporate seems to think he knows who that person is, but he isn’t sharing with the group – nor the readers – so the mystery is still intact. The suspense was extremely well done, too, just like I’ve gotten used to with a Huss novel. She manages to keep her readers guessing, while the characters are scrambling to stay alive and try to stay one step ahead of the bad guys (or gals).

Even with the tense storyline, there was a lot of humor. I enjoyed the fact that while Tori and West were the only two characters present for parts of the story, all the Misters and Five make some strong appearances as well. So between the overall plot of the series moving forward, the romance between West and Tori, and the mystery that is still impossible to guess, Mr. Corporate satisfied most of my reading needs. There is a strong story, characters that evolve, a lot of teasing and a solid plot.

Written in dual points of view, with chapters from either Weston’s or Victoria’s perspective, I felt like I was right there with them, and I have to admit my heart rate was racing in places – there was just so many things that could go wrong!

West is eerily silent and contemplative as he stares out the window. It’s like he doesn’t even notice me. I dressed in these clothes to taunt him, wore this low-cut shirt to pique his interest. And all I’ve gotten so far is indifference. He’s always been that way, right?

Everything about her is complex and convoluted. She’s a maze of emotions and a labyrinth of feelings that requires careful navigation or the wild comes out and can’t be put back.