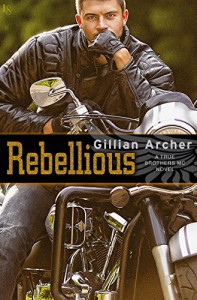 Every rebel needs a cause—and a woman to believe in. Discover why Heidi McLaughlin raves that “the sexy, alluring bad boys of the True Brothers MC will make your mouth water” in this smoldering novel from the author of Ruthless.
The black-leather-clad biker who just roared up on his Harley doesn’t resemble any single father Emily Clark has ever known. But as she watches “Reb” bonding with his son, Emily realizes there’s a lot more to this bad boy than his alpha-male attitude or his sinful good looks. And when Reb takes an interest in her, there’s no way she can resist his surprisingly tender touch. The one thing Emily won’t give up is her hard-won independence.
As president of the True Brothers MC, Reb owes a sacred debt of loyalty to the club, but his first priority is making sure that his son grows up right. Pursuing an unexpected affair with Emily is a close second. Then a violent stalker threatens her life, and this unconventional guardian angel really turns up the heat. Nobody messes with Reb, or anyone under his protection. Trouble is, how’s he supposed to defend Emily when she insists on going it alone? He’s willing to put his life on the line for her. Now, maybe, he needs to open his heart.

*I received a free copy of Rebellious from Loveswept via Netgalley. This has in no way influenced my voluntary review, which is honest and unbiased *

Rebellious is filled with danger, desire, dirty talk and enough sexy times to make anyone dizzy!

Rebellious is the second of the True Brothers MC series, and I actually have an ARC of Ruthless as well, but somehow, I read this first. I enjoyed myself, so I don’t think there will be any trouble for me by not reading these in order. It’s funny to me that in my books, I don’t mind a man who takes charge, and maybe even acts a little bit controlling, because in real life, that just wouldn’t fly. Reb is the president of the MC club, and Emily is the sweet, innocent school librarian who works at B&N during the school holiday. Emily’s next-door-neighbour is Reb’s ex and their 8-year-old son, Tucker. Who is very often left to his own devices, with our without a key.

The story in Rebellious is very fast-paced, and there is more going on than the incredibly steamy scenes between Reb and Emily. Tucker needed saving, and Emily was the one to bring him to his dad’s place, which just so happened to be the Club, where her best friend’s fiancé was a member. Now, I have no idea if real MC clubs treat their ‘old ladies’ or the female groupies the way they are treated in books, but the True Brothers MC guys seemed to be on par if I compare with other MC stories I have read. Quite sexist, and always in control, with a sliver of tenderness to keep the ladies wanting more – it’s simply irresistible in a romantic suspense.

Between someone stalking Emily, and a rival club vandalizing Reb’s house, there is more than enough suspense in Rebellious. And there is also enough substance to the story, with character development that made sense, and some real problems that had to be dealt with for Reb and Emily to truly trust each other and try to make the future a brighter place both for themselves and for Tucker. Written in first person past tense in Emily’s chapters, and third person past tense from Reb’s perspective, I loved both the narration and the spicy dialogues.

Reb’s gorgeous blue eyes were impossible to ignore this close to my face. “We’re gonna have a little talk later tonight about those roving hands.”
I winced and could feel the flush spreading over my face. “Or we could skip it and just say we did.”
Reb slowly shook his head.

“Okay.” I bit my lip and stood despite his hands trying to pin me down.

But still I continued down the hall toward the happy noises coming from the kitchen. Where I found REb leaning against the cabinets on the far side of the room. He straightened up slightly when he saw me, his eyes flaring with something hot.