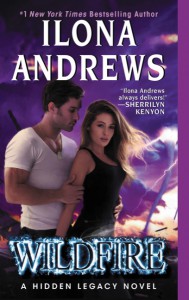 *I received a free copy of Wildfire from Avon via Edelweiss. This has in no way influenced my voluntary review, which is honest and unbiased *

Wildfire took me on a journey that was extremely fast-paced, filled with action, betrayal, romance, intrigue and a complicated plot. So well done!

What else can I say about Wildfire?
The character development is awesome.
The universe is completely set up.
I love Rogan. I also love Nevada. And Nevada’s family.
I love all the magic!
And the intrigue.
As well as the fight scenes.
And the action, too.
Now this sounds like a poem. But I’m no poet, am I?

Wildfire is fast-paced. And it’s so well done!
The storyline attractive, and I just want more.
Small secrets were revealed.
Some big ones as well.
And review still sounds like a poem. So I’ll just go with it, then.

The writing is so good. Even better than most.
Some tidbits from Burn for Me have come back to haunt.
White Hot mystery is partially solved.
And still, Wildfire has left me hanging – and I want more!
I guess I wrote a poem for the Andrews.
Hopefully that unlocked more Hidden Legacy lore.

His brother Leon was just about his exact opposite. Lean, dark, and fast, Leon alternated between sarcasm, excitement, and total gloom as quickly as his sixteen-year-old boy could produce the hormones.

I walked to the window. Outside, the evening had birthed a night. The stars spread above us, glowing sparks of jewel fire against the velvet blackness. A hoard that was the envy of any dragon.

I crossed the street, punched the code into the lock, entered the office, and locked the door behind me. I had had one hell of a day. I had left my phone in my car, my gun in Rogan’s car, and I had no underwear. Walking around without underwear felt odd. Being without my phone was even more odd.